The Yahoo! 360° blogging/profile/social networking product launched in April 2005. After about 2 years, talk of closing down the service began, but was delayed until there was a similar product to which existing users could switch. Now, 2 years after that announcement, the closure is finally here. Today is the last day 360° will be online and available for users to download or migrate their old blog content over to the new Yahoo! Profiles.

I did not work on Yahoo! 360­°, nor was I a serious user of it. I’m sure a lot of existing users are frustrated either because Profiles doesn’t do what they want, or the simple fact that it’s just different. I will say that if a product like this is no longer a high priority internally and does not have a clear future, it’s really best to close it down (in an orderly fashion) and redirect those internal resources elsewhere. Even without any new feature development, the ops impact alone for keeping a service like this online is pretty significant. 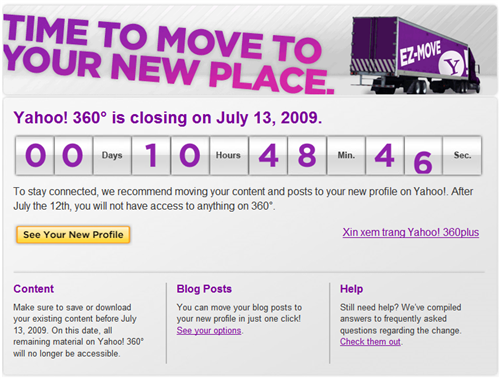 For those that are looking for help with 360° migration or other issues, please see the online help.