Watching the Great American Race yesterday, I couldn’t help but notice that Ask.com has tuned into NASCAR in a big way. Sure enough, it turns out that Ask.com has signed a big deal with NASCAR:

Ask.com, a leading search engine and an operating business of IAC, announced Wednesday it has entered into partnerships with NASCAR, NASCAR.COM and Hall of Fame Racing. Under the terms of the partnership with NASCAR, Ask becomes the Official Search Engine of NASCAR, with category exclusivity and a broad set of promotional rights in order to reach the sport’s estimated 75 million loyal fans.

In addition to the on-screen advertising, Ask.com is sponsoring Bobby Labonte in the 96 car (for 18 of the first 21 races), has created a NASCAR toolbar, and has created a new NASCAR homepage. I think the idea of an “official search engine” is pretty solid, even if it sounds a bit hokey. This move won’t put Google out of business, but Ask should pick up some incremental search traffic from NASCAR fans during the year.

For an idea of how valuable this kind of exposure can be, see my previous article on NASCAR sponsorship exposure value.

I wish Yahoo! had taken this opportunity a couple years ago when we were involved in NASCAR (Yahoo! sponsored Tina Gordon in her Busch series car). Unfortunately, I don’t think the value was there for Yahoo!, especially considering that Gordon didn’t qualify for many races and didn’t spend much time running up front.

Here’s a screenshot of Ask.com taken in the middle of the Daytona 500 yesterday: 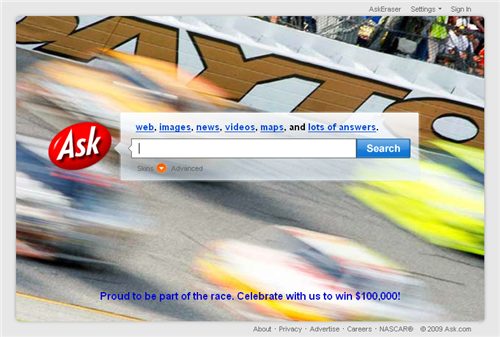