Danny Sullivan on SearchEngineWatch has a great article covering the release of Internet Explorer 7 and the battle for the default search engine:

Now that Internet Explorer 7 has been released in final format, I wanted to look at how search is being handled within the browser. There’s been lots of discussion and worries about this in the past. Speculation time is over; reality is here. In this article, how the IE7 search box works, how you can change it and how Google and Yahoo’s toolbars behave within it to try and maintain their default status, once gained.

I’ve only been on the periphery of this issue here in the office, but I know the default search engine seems to be the new battleground for search. (Just looking at the Google/Dell deal will give you an idea of the dollars at stake.)

Everyone not working at Microsoft was worried that IE7 would clobber any default home/search page settings and point everything to MSN Live Search. From Danny’s article, it seems that’s not the case. Certainly on a clean install, IE7 will point to Microsoft, but for the upgrade case it seems they’ve done a reasonable job of leaving settings alone.

Conventional thinking says that most “normal users” (i.e. people outside the internet industry) will just use whichever home page and search engine their browser points to and will never change it. I wonder if that’s really true. Even non-techies I know seem to have their own preference (most seem to like Google the best).

I’ll also be curious to see what percentage of users will search from the searchbox in the chrome as a convenience. That’s one of the best features IE7 has copied from Firefox and I’m guessing it will be very popular. (Now if they had only copied the Ctrl-K shortcut…) 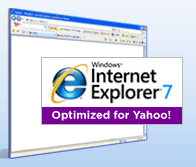