This picture from a New York Times article on the Vista launch has been making the blogging rounds today: 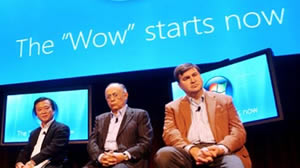 Now, it’s hard to argue that the executives pictured (from Dell, Intel, Microsoft, Toshiba, AMD and HP) all look pretty serious, possibly even dour. But, who knows the context of that exact moment when the picture was taken? Rather than being a real indicator of the enthusiasm (or lack thereof) of the participating companies, I think it’s just the same old media trick of choosing an image to suit the story, even (especially) if it doesn’t portray the subject in a positive light.

Contrast this with the excellent coverage of the Steve Jobs keynote at this year’s Macworld at Presentation Zen. At first glance you might think it’s the same old tune: boring corporate guy from Cingular pales in comparison to the cool kids from Apple, Google, and Yahoo. But, read through the whole summary, then watch the video. The video gives you the whole context which exactly backs up the points of the story.