I continue to receive periodic email newsletters from Creative, hoping that eventually they will update the firmware for my poor little Zen Touch MP3 player. Today’s email included a teaser subject that I couldn’t resist:

If you guessed that we have another example of patenting the obvious, you’d be right! Here are some choice excerpts from the press release (emphasis mine):

Creative’s invention for the user interface for portable media players enables selection of at least one track in a portable media player as a user sequentially navigates through a hierarchy using three or more successive screens on the display of the player. One example would be the sequence of screens that could display artists, then albums, and then tracks. When the user selects an artist, the player displays a list of albums for that artist. Selection of one of the listed albums then displays a list of tracks on the album.

“The user interface covered by the Zen Patent was invented by Creative research and development engineers in our Advanced Technology Center in Scotts Valley, California,” said Sim Wong Hoo, chairman and CEO of Creative.

“I am very excited that we were awarded the Zen Patent, which helps to protect our invention and recognizes our innovation in portable media players,” said Sim. “After a major investment of time and effort by a group of our research and development engineers, we developed a way for a user to efficiently and intuitively navigate and select tracks from a significant number of tracks stored on a player. Before this invention, there was no intuitive and efficient way to deal with the large number of tracks that could be stored on a high-capacity player.”

Talk about patenting the obvious. Hmm, let’s see…select artist, then album, then track…genius! I wonder what the “major investment” consisted of? It would be nice if Creative would instead create firmware updates for their existing products like the Zen Touch to support Windows Media subscription services and fix their playback problems.

And of course, there are plenty of mentions of the iPod and how this Creative patent covers work that predates the successful audio players from Apple. Anyone smell a lawsuit coming? 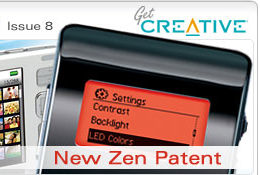